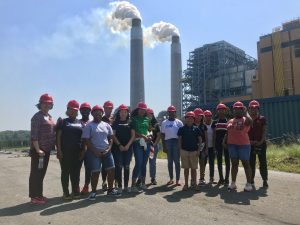 Duke Energy has awarded the Crosby Scholars Community Partnership $10,000 to support its SHE Project, which will guide African-American and Latina girls in economically distressed areas to pursue careers in science, technology, engineering, and math (STEM).  This is the second year of funding: in 2018, Duke Energy awarded Crosby Scholars $15,000 for The SHE Project.

“These more lucrative careers will empower women with more financial resources,” said Mona W. Lovett, Crosby Scholars President & CEO. “As the Gender Lens study prepared by The Women’s Fund reports, STEM careers have hourly rates that are high enough to meet basic needs with only one job. SHE is designed to use a holistic approach to address root causes of poverty.”

“Our goal is for our female Crosby Scholars to be EMPLOYEED in careers that provide a living wage and that they are paid well for their work,” Lovett said. “We appreciate Duke Energy’s continued support of The SHE Project.”

A dozen girls in The SHE Project toured Duke Energy’s Belews Creek Steam Station at the end of July, and the girls heard from a female Duke Energy mechanical engineer about her educational path and career.

“I learned that you can do whatever you want if you believe it,” Elia said. “…and you can change the world.”

The SHE Project offers workshops and field trips beginning in 7th grade to enable girls to learn about the possibilities for women in STEM jobs, so that they will take classes in middle school and high school that put them on that college and career path. The SHE Project provides role models and mentors as well as guidance in course selection to help these students stay on track for college enrollment in STEM programs.

“Our investments in students and STEM initiatives strengthen the pipeline of highly-skilled workers who will lead us to a smarter energy future in North Carolina,” said Jimmy Flythe, district manager for Duke Energy. “We are thrilled to partner with Crosby Scholars and its SHE Project for the second year to promote diversity in the workplace and inspire young women to pursue careers in STEM.”

Crosby Scholars is a free college access program that prepares 6th– to 12th-grade Forsyth County students academically, personally, and financially for college admission and other post-secondary opportunities suited to a student’s needs, aptitudes and dreams.

Duke Energy (NYSE: DUK), a Fortune 150 company headquartered in Charlotte, N.C., is one of the largest energy holding companies in the U.S. It employs 30,000 people and has an electric generating capacity of 51,000 megawatts through its regulated utilities, and 3,000 megawatts through its nonregulated Duke Energy Renewables unit. Duke Energy was named to Fortune’s 2019 “World’s Most Admired Companies” list, and Forbes’ 2019 “America’s Best Employers” list. More information about the company is available at duke-energy.com. The Duke Energy News Center contains news releases, fact sheets, photos, videos and other materials. Duke Energy’s illumination features stories about people, innovations, community topics and environmental issues. Follow Duke Energy on Twitter, LinkedIn, Instagram and Facebook.