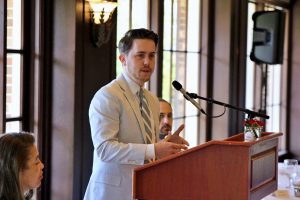 As a first-generation college student, Crosby Scholars President & CEO Mona W. Lovett understands that being the first in your family to go to college is not easy whether you come from a small town or a large urban center.

“Neither of my parents graduated from high school,” Lovett said. “My dad worked as a butcher in a meat-packing plant for over 40 years, and my mom sold life insurance door-to-door.  They were proud hard-working people who wanted more for their children.  My mom expected me do well in school, go to college and graduate in four years.  The only request they had of me for college was to go to an in-state college, and they promised to help me get there as long as I did my work.  I earned a scholarship to help cover tuition and promised my parents I would work so that I wouldn’t have to take out loans for college.”

Lovett holds a Bachelor of Science in Human Services Counseling and Master of Science in Education from Old Dominion University in Norfolk, Virginia.

“Having a counselor who encouraged me, parents who supported me, and good grades made the difference,” she said. “I never felt that I didn’t belong, but I felt obligated to achieve and graduate.”

Richard Watts, the coordinator of Crosby Scholars African American Males Pursuing Educational Dreams (AAMPED), grew up in Fredericksburg, Va., and he was the first in his family to go to college. His uncle, a middle school 6th-grade teacher, inspired Watts to believe he could go, too. He grew up in a small town with one high school, where he’d spent his life with the same students.

“You need a fresh start,” the guidance counselor told Watts. “You need to find a small school away from your friends.”

His guidance counselor introduced him to Wake Forest University, where he majored in history and minored in religion and education. He received his master’s degree from Appalachian State University. Watts taught school for 10 years and worked in administration for 20 years. He retired and joined Crosby Scholars as the AAMPED Coordinator.

Crosby Scholars Hispanic Outreach Coordinator Miriam Hernandez was born and raised in New York before moving to Puerto Rico with her family when she was 16 years old.

“I saw the struggles my parents were having in relation with obtaining jobs,” she said. “Even though my dad had his own bakery, he did not know how to do his accounting books.”

Her older cousin was a professor at the University of Puerto Rico, and Hernandez enrolled there.

“She was the one who was there with me to get this done, and then I was there for my brother, who is 10 months younger than me,” she said. Both Hernandez and her brother majored in business administration. It was a way to help him be able to progress and be able to open more than one bakery.”

“At the beginning, my father thought my brother should be the one to study,” Hernandez said. “Then he saw that being the first and the oldest, I was the one who encouraged my brother.”

“Students have many more opportunities than we had many years ago. It’s a way for you to not only grow as an individual, but to help your family grow as well.”

Senior Program Coordinator Julie Cunningham, a first-generation college student, graduated from Virginia Commonwealth and received her master’s degree from the University of Virginia. And Blaine Pugh, Crosby Scholars Near Peer Advisor at Forsyth Technical Community College, is a first-generation college student who received his associate’s degree from Cape Fear Community College and then transferred to the University of North Carolina at Chapel Hill, where he graduated with a bachelor’s degree.

“Carry with you the values this program teaches, no matter where you go,” he said.

“I’ve lived the story that I’m telling,” Lovett said. “Students today still need encouragement, support, confidence, direction—and hope. College was life-changing for me. That’s why I was a college admissions officer for 10 years and for 23 years have worked at Crosby Scholars as the Executive Director and now President and CEO. I work each day for students to have the opportunity to go to college, like I did.”